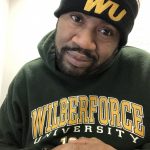 By the time Dominic Chatman finished completing his degree in organizational management from the Wilberforce University CLIMB program, he was a successful radio personality in Columbus (Ohio).  Chatman was familiar with the university because he had begun his undergraduate approach at WU as a business major with a minor in finance.  But after a few years, he became distracted and left the campus. Fast forward more than a decade later, he returned as a student in the CLIMB adult degree program, graduating in 2017.

“I was always organized, but the CLIMB program taught me the correct way to set up project management. I learned so much more.  Now, my methods have been enhanced, ” said Chatman.

The Credentials for Leadership in Management and Business (CLIMB) program offers an alternative method to achieve a college degree. A working adult, at least 23 years of age having earned a minimum of 45 semester hours of transferable credit, with a 2.0 GPA or greater can apply.

Chatman developed a strong affinity for the school during his undergrad years. He remembered the family atmosphere and the “we won’t let you fail” attitude of his early instructors, one of whom stands out – Jack Williams, who died in October of 2020. He fondly remembers Williams’ encouragement when Chatman was gaining a following as a good DJ, creating sounds for various campus activities, and getting paid for doing it.

“My roommate became my emcee and I brought my DJ equipment from home. I started DJing at parties on the weekends. Jack Williams told me what I was doing was a business and to think of it that way. His words began to shape and mold me. Mr. Williams also encouraged me to join the WU golf team and he helped enhance my skills on the course. I owe him everything.”

Despite his campus popularity, Chatman left Wilberforce, but through the years he developed a great career, finding success in radio and marketing. His company, Think Huge Group, moves music projects and promotes artists’ songs and their labels. His full time job as Dommy Styles pushes urban music through the airwaves of Radio One owned radio stations, Magic 95.5, Joy 107.1, and Power 107.5, which simulcasts with 106.3, all of which are FM stations.  He was well known in Columbus business and music circles, but he still didn’t feel complete.  There was a nagging, unfinished feeling and he knew what he needed to do. In 2016, he enrolled in CLIMB.

If you look at Chatman’s schedule, you wonder how he has time to exhale. But the very busy man makes intentional time to spend with his family. He says he fondly remembers standing in the commencement line during his CLIMB graduation when his young twin sons left the bleachers, ran to him and hugged him just before he walked to his seat in the Gaston Lewis Gymnasium to accept his degree. It was then he realized it was his children and his wife who inspired him to finish college.

Today, radio personality Dommy Styles is CLIMB graduate Dominic Chatman who also teaches media arts at Columbus Arts and Technology. He is enjoying the fruits of his hard won degree and basking in the warmth of the HBCU experience that is Wilberforce University’s CLIMB program.