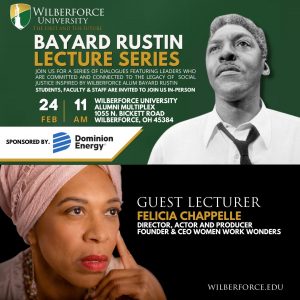 Sponsored by Dominion Energy, the lectures are named for Bayard Rustin, the human rights, civil rights and international peace activist who was a student at Wilberforce in the 1930s.

In her lecture to the WU campus community, actor, author, poet, Felicia Chappelle will discuss mental health, which she says is not connected strongly enough to overall wellness. She will address the psychological scarring of slavery, compounded by skin color as the foundation of non-acceptance.

Like Bayard Rustin, Ms. Chappelle is connected to Wilberforce. Her mother was a member of the university’s staff in the late 1960s.

“We are excited that Ms. Chappelle will bring thought provoking remarks to challenge our students to consider their place in history and the impact they can make in their communities and circles of influence,” said Natalie Coles, VP and Chief Development Officer. “We are grateful to Dominion Energy for its support of this critical lecture series designed to continue Mr. Rustin’s legacy of angelic disruption for the greater good.”

Rustin’s life after Wilberforce was dedicated to pioneering issues of human rights and social justice. He worked closely with Dr. Martin Luther King, Jr., and is credited with helping organize the Montgomery bus boycott and orchestrating the historic 1963 March on Washington, DC.  As an openly gay man in the 1930s, Rustin is often credited as  an early advocate of what is now the LGBTQ+ movement.