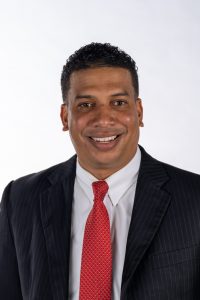 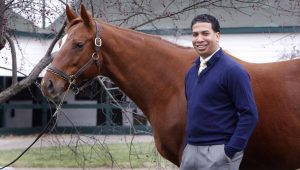 This commission, spearheaded by Dr. Tashia Bradley, is designed to add another dimension to students’ portfolios.  As the university’s executive vice president and chief innovation officer, Dr. Bradley wants WU students to have access to different motivational experiences that will move them beyond tradition.  It is expected this level of training will offer students a broad experience to lead them to dream big and think outside the box.

“As I was reflecting on the next residency, I began hearing about a horse named Necker Island owned by African Americans, running in the Kentucky Derby. I became intrigued by how these Black horse owners entered into this very white economic space and organized ownership groups to not only purchase winning horses, but also to own a million dollar company.”  – Dr. Tashia Bradley

Greg Harbut is a third generation horseman and one of the owners of the thoroughbred, Necker Island. President of HarbutBloodstock, his great grandfather Will was the groom and caretaker of the legendary, champion racer, Man o’ War. His grandfather Tom continued the family’s horsemanship involvement and by the time he died at the age of 94, he had gained fame and respect in the racing and breeding industry.  Beginning as an exercise rider, caring for horses that belonged to cosmetics magnate Elizabeth Arden and Hollywood movie producer Louis B. Mayer, Tom Harbut eventually became the general manager of breeding stallion operations for the Harry F. Guggenheim family.  He reached a career pinnacle as co-owner of a racehorse that he entered into the Kentucky Derby.  Despite his accomplished history, in 1962 era Kentucky, because he was Black, Tom Harbut was not allowed to sit in the grandstands to watch as his horse took 11th place.

“We have in our Black historical past, experienced exclusion that has made us have to create and ‘become’ despite the situation, and use these circumstances to become successful.”  – Dr. Tashia Bradley

Decades later, America is still struggling to move beyond racially unjust conditions. In 2021, Tom Harbut’s grandson Greg, manages breeding stock and is known and respected internationally.  Through his experience, the younger Harbut will bring the entrepreneurial skills of acquisition, management and net profit to the WU residency. He will also add the element of understanding the complications of being a Black man in the thoroughbred industry.

“I think what I will bring is a practical side as opposed to a theory side,” Harbut says. “The experience of what it is like to be an African American man in a predominantly white industry and the challenges that they (students) will have to look forward to face and overcome.” – Greg Harbut, president, HarbutBloodstock

Harbut hopes this, his first involvement in a teacher residency will be inspirational. He wants to encourage the students to dream and prod the awakening of their enterprising spirits.

“This is still a prime example about learning to break down barriers and allow your imagination to run wild. This will give exposure and the possibility for them to find what they’re passionate about so they can achieve success and then explore it. We all start with one step.”