On the Occasion of Dr. Martin Luther King’s Birthday

Home On the Occasion of Dr. Martin Luther King’s Birthday

Now is the time to make real the promise of democracy
Martin Luther King, Jr. 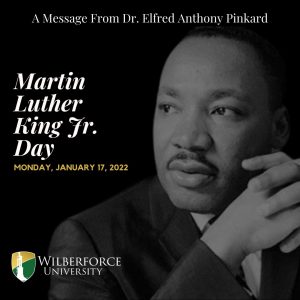 Had he lived, he would have been 92 years old on January 15, 2022. Nearly 54 years ago, an assassin’s bullet ended a life of incredible service and audacity. His ministry and the power of his intellect and words forced a nation to confront its brutal and unjust treatment of its black citizens. In his life, he would be praised but vilified and yet his message remained unchanged and unfiltered. He wished a just and peaceful world for every human being.

He is uniquely ours and yet he belongs to the world. Today, his name is exalted, and a nation pauses to celebrate his life and legacy on his birthday. Some spend the day in service as an honorable tribute to his memory, some will take a day of respite from a weary world, and some will gather in events and ceremonies. Whatever the path on this day, let us not forget that the work that Martin Luther King began remains unfinished.

As an institution whose founding is steeped in a tradition of audacity and upending the status quo, whose ancestral roots are shared with Martin Luther King, Jr. and whose mission is to prepare and equip African American students with the pride, fearlessness and consciousness required to be bold social change agents and unrelenting advocates for social justice, it is our unapologetic duty to keep Martin Luther King’s dream, hope and fight alive.

As a University community, on this day, as in years past and each year to come, we pause for a moment of reflection and renewal to honor a life well and richly lived in service and Christian love. We acknowledge one of our own and in so doing we reclaim our collective greatness and take up the mantle to continue the work still to be done.

For when people get caught up with that which is right and they are willing to sacrifice for it,
There is no stopping point short of victory.

We are Wilberforce University: The First and The Future.
Suo Marte