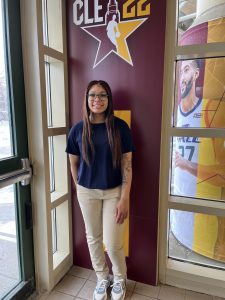 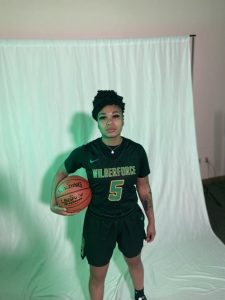 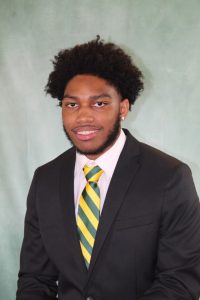 When E’taja Thompson, Wilberforce University, ‘22 says basketball is in her blood – she is speaking figuratively, of course. But if you stretch your imagination, her declaration about her love for the game could be taken literally.

E’taja, a small forward on the WU women’s team, was introduced to the game at age 3, when her mom, Tanya Ford-Baker, tossed a basketball to her for the first time.  No stranger to the game, Ford-Baker saw plenty of roundball action as a member of the Trotwood Madison High School girls team in the early 90s. And years later, E’taja’s older brother Eric Thompson would develop skills that have now taken him to play professionally in eastern Europe.

But now, it’s E’taja’s turn to move into the next level of basketball. The senior business marketing major will spend the weekend of February 18th – 20th working with the NBA at the All Star game in Cleveland, Ohio. She and WU senior LaDarryl Hardy have been selected to represent Wilberforce at the NBA’s All Star Game college internship camp. For three days, they will experience what it’s like to move about the business end of professional basketball.

“I hope to connect with some of the players,” she said. “I also want to see how things operate on a day to day basis.”

When applying for the internship, LaDarryl and E’Taja were asked to explain why they were interested in being a part of the professional basketball weekend. For her, the response was easy. “Since I am an athlete, I want to know what happens once a basketball career is over, and still be connected to the game in some way.”

She said she noticed how Trotwood High School and University of Dayton basketball star Chris Wright favored his connections after leaving the NBA to become an entrepreneur. As a Trotwood grad, she wants to emulate Wright’s pattern to carve her career path after college. In the meantime, this weekend will play an important role in how she moves forward after the Wilberforce commencement in May.

“I never would imagine this would ever happen. This is a dream come true and I’m blessed to have this opportunity.”