Brown Pushed to Increase Funding in Senate Version of the NDAA

WASHINGTON, DC – U.S. Senator Sherrod Brown (D-OH) today announced more than $40 million for basic research at Historically Black Colleges and Universities (HBCUs) and Minority Institutions (MIs) in the National Defense Authorization Act (NDAA). The funding is designed to increase HBCU/MI participation in DoD’s research, development, test and evaluation (RDTE) programs and activities. The conference report has passed the House and Senate and now heads to the President’s desk to be signed into law.

“Historically Black Colleges and Universities, like Wilberforce and Central State in Ohio, are a critical part of our nation’s higher education system and provide important research opportunities to minority students,” said Brown. “Additional funding for these research programs will help ensure we widen the talent pool and strengthen minority participation in research and development for years to come.”

Sen. Brown led a bipartisan amendment to the NDAA advocating for robust funding for RDTE. In 2019, Brown wrote to Congressional authorizers asking for increased funding in the final version of the NDAA. The funds still need to be appropriated, and Brown said he will continue fighting to secure these funds in the final Defense Appropriations bill. 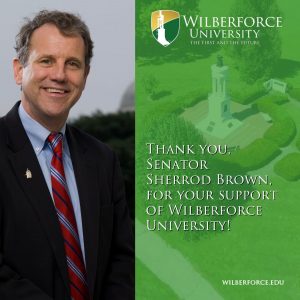