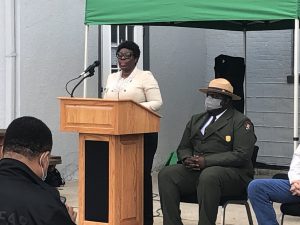 One of the definitions of the word inauguration is “the beginning of”  and that is the hope obviously carried by millions of American voters who looked for change at the top in Washington, D. C. Much of the shift in this history making presidential administration was mobilized by black women – moved by the selection of a Black and Southeast Asian and distinctly bicultural woman as a vice presidential nominee. Now as Madam Vice President Kamala Harris, she is second in command of the United States of America, a soul stirring fact in a country that has been historically torn by racial division, with its global reputation recently smeared by domestic terrorism. Because Black Greek organizations and HBCUs have historically played major roles in political organizing, Harris’ decision to attend an historically black college (HBCU) and become a member of the oldest Black sorority helped provide a foundation for her future involvement in politics. That topic was presented to Wilberforce Executive Vice President Tashia Bradley by WDTN TV news reporter Lauren Mixon: