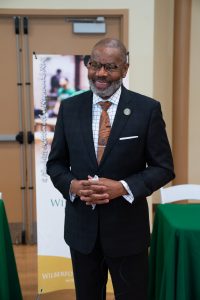 It is rare that the writings of 19th century Charles Dickens connect us to the 21st century. But Dr. Elfred Anthony Pinkard did just that when he enlightened a panel of Dayton public health officials, the city’s mayor, and representatives from social service agencies and state politics. Dr. Pinkard not only informed the group about the university’s historic presence, but he first explained why Wilberforce University opted to select virtual learning as the mode of study for the fall semester.

“It is the worst of times, it is the best of times,” Wilberforce’s 22nd president commented to the panel in his opening statement via Zoom. The paraphrased quote from Dickens’ historical fiction, A Tale of Two Cities, referred to how revolutionary uprisings in 19th century Paris and London conformed and reformed lives in those cities.  Comparing that to the coronavirus which has similarly upended our lives by presenting unforeseen challenges, Dr. Pinkard explained how selecting remote learning and teaching means keeping the health of students and faculty as a priority, while adding an element of  transformation.

“This, what we say at Wilberforce, is an opportunity to really consider the grand possibilities and new ways of gathering, new ways of engaging and new ways of connecting with one another, our students and faculty, and using the tools of a virtual environment to create a vibrant, exciting, and intellectual learning experience.” – Dr. Elfred Anthony Pinkard, 22nd president, Wilberforce University

Before the administrative decision that kept students and faculty off campus for the fall semester, the president and his staff did their homework, focusing on the pandemic behavior of COVID-19 and the social behavior of college age students. Realizing there was no way either conduct could be fully monitored, Wilberforce immediately took aim at training faculty to teach digitally and supply students with fast internet and high quality laptop computers. These tools are needed to narrow the digital divide that, if not mitigated, can have a negative impact on the academics of students, many of whom at Wilberforce, are underrepresented.

We know that education is part of the approach to alleviate systemic barriers and historically black colleges and universities like Wilberforce, enrich the academic lives of their African American students.  Dr. Pinkard concludes now, there is an even greater, heightened interest in HBCUs that can be attributed to not only the current reckoning surrounding racial inequality and social injustice, but also the recent vice presidential nomination of Senator Kamala Harris, an alumna of Howard University.  That attention has now carved a massive, philanthropic path from major donors to the hallowed halls of not only the senator’s alma mater, but other HBCUs and their fund raising, advocacy groups.

“This is an awakening of people beyond the HBCU sector on these institutions and their power to be really game changing influences in the lives of people of African descent and their communities.”

Donors, however, often distribute their initial benevolence to larger HBCUs. That means, despite the new surge of charitable donations, small, rural HBCUs like Wilberforce are challenged on the receiving end because their staff, endowments and enrollments are comparatively smaller.

In fact, large and small college enrollments have declined for the 2020 fall semester, with those figures particularly affected by COVID-19. According to Money Magazine, “….the number of new enrollments reported in April of 2020 was down significantly compared to 2018 and 2019.”  HBCUs are historically financially stretched, so adding the coronavirus pandemic to their mix created an even more delicate, financial picture.

“Every small institution, other than the very, very elite, had forecast a 15 to 20 percent decrease in enrollment and we are not immune to that trend. Right now, we’re trending 83 percent of the goal we set for ourselves in terms of our enrollment.” – Dr. Elfred Anthony Pinkard

Because the majority of HBCUs are located in the southern states, it is unique that Ohio boasts three, all located within a half mile of each other, in Greene County, near Dayton. In fact, Central State University and Payne Theological Seminary evolved from Wilberforce University. It was the latter part of the 19th century when the Wilberforce board of trustees elected to establish a seminary – as an independent institution of learning based upon the teachings of the African Methodist Episcopal Church.  In the beginning of Central State’s history, Ohio’s General Assembly set up the school on the grounds of Wilberforce as the Combined Normal and Industrial Department.  It formally separated in 1947 and was later named Central State College before it gained university status.

As the nation’s first, private, historically black college, Wilberforce University strongly maintains a legacy of defending social justice.  Alumnus Bayard Rustin, an advisor to The Rev. Dr. Martin Luther King Jr., is the architect of the famous 1963 March on Washington, and now a university lecture series bears his name. That energy has not been lost on the students. They are active in voter participation and will be involved a civic engagement project with the local chapter of the National Council of Negro Women.

“There are a lot of prognostications about what’s going to happen to small, special mission institutions like Wilberforce in a post COVID-19 environment, but we refuse to accept any of those. We’ve been around for 164 years and I often say, resilience and triumph over challenge is a part of the DNA of our institution.”

While balancing an arena of global illness and financial shortfalls, Wilberforce University will strive to maintain its historic focus, intention and discipline as it achieves more victories during the best of times and prevails over its struggles.