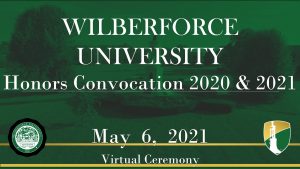 As this academic year draws to a close, Wilberforce University, the nation’s first, private HBCU, announces its 2020 – 2021 student academic honors.

Nearly one fourth of WU’s total student enrollment of 392 has been accepted to the university’s President’s List (a GPA between 3.6 and 4.0) and the Dean’s List (a GPA between 3.0 and 3.59).  Also, twenty four percent of these honor scholars are members of the university’s athletic teams.  These statistics have prompted a proud reminder from WU Athletics Director, Derek Williams.

“This is a prime example of why we are students first, and athletes second,” Williams says. “These young men and women are toeing the line and leading by example.”

President Elfred Anthony Pinkard has a message of gratitude for the accomplishments of all Wilberforce scholars.