For the second consecutive year, Wilberforce University will join a group of other historically Black colleges/universities (HBCUs) on a 22 week competitive video gaming journey.

With a commitment spearheaded by the nonprofit Cxmmunity, HBCU Esports is designed to boost the participation of underrepresented students in esports through the development of STEM skills.

Gamers like Kelvin Frempong will be a part of it. The Wilberforce senior has been competing in the video gaming world for six years.

“I’m a gamer for sure. I love to compete. It’s all about strategy and how you know your match up and how they play.” –Kelvin Frempong, Wilberforce esports team

The Columbus native will join other Wilberforceans to challenge 24 other HBCUs in Madden and NBA2K.

In a prior published interview, Cxmmunity co-founder Ryan Johnson said, “We’re incredibly proud to bring the HBCU Esports League back for its second season with the support of Twitch, Verizon, and Discover.”

In that same interview, Johnson said this engagement will help Black teenagers advance in selecting gaming, STEM (science, technology, engineering, and mathematics), and esports careers when they attend college.

Kelvin Frempong’s interest in science is expressed as a biology major. “Esports is all about sports and everything in sports requires science, from the way our bodies move to the way our minds think.”

He and the other members of the WU team will soon be able to use that science to create the best versions of their gaming. 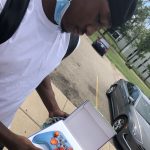 Senior Kelvin Frempong is a member of the WU esports team